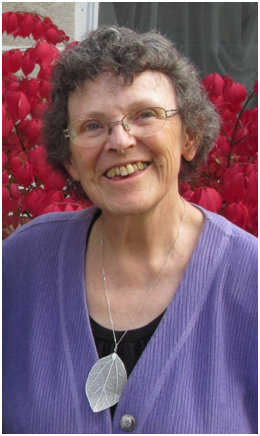 Millie was a palliative care physician when the love of quilting entered her life. She had sewn clothes from a young age, but made her first attempt at textile art during late nights looking after her newborn son Andrew.

Beginning with an applique course, Millie has gone on to acclaim in the world of Art Quilts. Her textiles are not of traditional patterns, but creative interpretations of subjects close to her heart. Delicacy and a demanding perfection mark her work, tinged with a sweet nostalgia for nature, memories and cottage life.

One definition of an art quilt is “a creative visual work that is layered and stitched or that references this form of stitched layered structure”. (SAQA, see below). It may be held together by machine stitching and/or by a hand running stitch. There are traditional quilts and art quilts; these may be displayed on walls, on beds, or as free-standing fibre art.

In 1998, when Andrew was eight years old, Millie undertook to completely design a large quilt for him which reflected his love of hockey. It depicted a rink, necessitating perspective, on which a young boy’s hockey team played against a team of dinosaurs! Andrew identified the dinosaurs by their qualities in relation to his favourite stars of the game. Parents watch from the bleachers.

After this pivotal creation, Millie broke the bonds of traditional design, and never returned. In her presentations and trunk shows to quilting guilds, she encourages people to go beyond the use of patterns. She introduces new techniques and liberates experimental conceptual approaches.

Quilting is slow work. Often in beginning a new design, Millie gathers ideas in a binder- a progress record of photos and thoughts, swatches of cloth- each quilt produced has its own history book. Then, on a large felt design board, the chosen textiles of colour and relevant shape are pinned and adjusted to implement the quilt.

This design phase may take as many hours as the actual creation. When the quilt top is finished, sandwiched with batting and an interesting backing, it is then stitched together. If the quilt is to be machine-stitched, the quilt moves to Millie’s vintage Bernina 1260 sewing machine or her sit-down mid-arm machine by Handi Quilter.

The design and colours of the actual stitching are conceived to relate to the subject. The excellence and intricacy of hand movement which binds together the layers reflects years of practice. Frequently Millie’s creations are hand quilted with a running stitch, a contemplative and skill-challenged undertaking.

The themes of Millie’s art quilts stem mostly from nature. Her love of canoeing, family and cottage life have been a main inspiration. When she was 12, she bought her own canoe, the one she still has today, and where she feels most at home. Two years ago, her husband gave her an underwater camera for Christmas, which expanded her theme of water lilies to a view from beneath. This was the inspiration for a recent quilt “Up Close and Personal”, of which Millie writes “Despite years of canoeing in Muskoka, only recently did I swim below my beloved water lilies-I was entranced by the quiet, ethereal experience of lily pads suddenly appearing then vanishing”. This undulating vision is transposed in subtle greens, silk organza makes transparencies that show the lilies in the translucence of light from above tangled with long strips of seaweed.

Millie haunts thrift stores for unusual, recycled fabrics. Adjoining her main studio space is a room surrounded with many box-like shelves. On the shelves fabrics are categorized in tantalizing juxtaposition: the rich and evocative colours of Japanese floral cottons, Indonesian batiks, Indian silk, homespuns, linens, African block prints- any fabric which may echo her concepts. Fabrics are indexed by countries and colour. Below in shelves of a central island is her formidable collection of quilt-related books, all indexed, as well as the binders which form a record of the evolution of her many projects.

Millie and her husband Graeme Chalmers came to Fergus in 2008 when Graeme retired from professorship at the University of British Columbia. After much searching, they bought a heritage stone house on St. Andrew Street in Fergus, by the Grand River, adapting it to their mutual artistic needs. Millie had lived in several communities of southern Ontario in her youth, where her father was a minister.

At the age of seven she told her teacher she wanted to become a medical doctor. This early aspiration never wavered. On scholarship, she attended the University of Western Ontario for nine formative years to gain an M.D. She spent twelve years as a family physician in Hazelton, a small community in British Columbia, 750 miles north of Vancouver, with a largely First Nation population. Later, after meeting Graeme, she moved to Vancouver and worked at St. Paul’s Hospital for 19 years as a palliative care physician. St. Pauls’ was the first palliative care unit in Canada (1989) to integrate AIDS patients and cancer patients in the same unit. It was tough but rewarding work, supported by superb colleagues.

Millie’s return to Southern Ontario was spurred by a family cottage in Lost Channel, enjoyed till 2013. It has now been exchanged for another beloved cottage with better access, on Six Mile Lake, but Millie’s red canoe follows her everywhere. In it she finds her greatest happiness. Her quilts are reproduced in publications such as Cottage Life, the Canadian Quilter, Fabrications, Studios, Quilters’ Newsletter, and Fibre Content (2016 juried show at the Art Gallery of Burlington). She is also a member of SAQA, Studio Art Quilts Associates, which now boasts 3400 members internationally, dedicated to the promotion of the art quilt through education, exhibitions, professional development, documentation and publications. In May 2016, SAQA mounted the exhibition MY CORNER OF THE WORLD -at the Stratford-Perth Museum. This stunning collection of Art Quilts presented the vision of designers and stitch artists from across Canada and around the world and is currently a travelling show. Members were asked to draw on memories of locations relevant to their lives – one of Millie’s three entries was “Washday Blues”: a clothesline of rust-stained washing hangs out over a rural landscape of Southern Ontario, a silo is subtle against a varying blue sky. Millie’s notes are poignant: “Even as I celebrate that landscape and the farming roots passed on from my grandfather, I mourn the progressive loss of those wonderful farms and barns, and the malignant urban sprawl that devours our lovely farmland”.

Millie’s reputation for uncompromising and deeply sensitive, imaginative work has brought her name to the forefront of the fibre arts world, where her vision is received with ever increasing appreciation.