How the Canoescapes 1: Up Close and Personal quilt was created

Canoescapes 1: Up Close and Personal

I received the invitation to submit a piece for It’s Time for Colour.

Brainstorming (including with my husband and son) – circus, flowers tropical birds or fish, something to do with children’s wishes, and others (as seen as my journal page of that day). 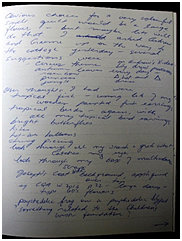 We were at the cottage, and there were two things happened just after the invitation that helped my decision: 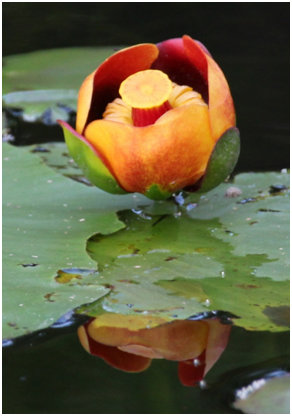 Next decision was how to translate my excitement into fabric. Initially I thought of photo transfers and photo editing, and played around with this. However, I tend to do things the slowest method, so instead, I experimented with sizes of the moon and the pond lily to fit into the required 12” x 16” format, made patterns from my enlargement, and hand-appliqued the piece (again, fusing would have been much quicker!). 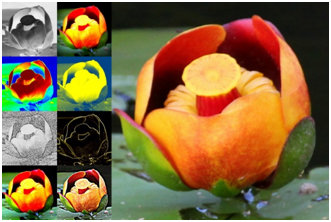 Auditioning fabric for the pond lily applique pieces and for the leaves:

I wanted to convey the darkness and the mystery of the trees and leaves in the periphery, so after searching for appropriate leaves in my extensive fabric stash, I created some leaves with stamping (wood blocks and handmade Styrofoam blocks) using Shiva sticks. 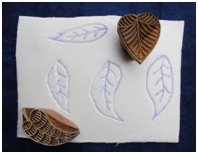 I auditioned the leaves, initially placing the leaves over the moon, but in the end decided to keep them to the periphery and let the moon shine (I had been concerned that the moon might compete too much with the pond lily, but in the end I felt that they complemented each other.) 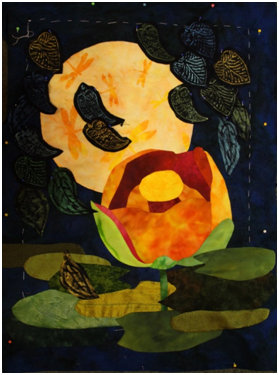 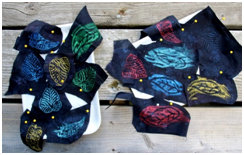 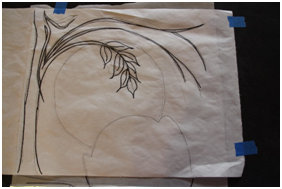 Creating a pattern for the very dark tree on which to applique the leaves.

Time for quilting: trying out designs to quilt the moon, and testing quilting lines on a paper copy of the pond lily. 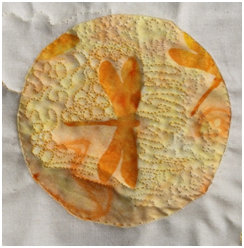 Not only was I trying to use a new sewing machine during this month, I also tried wool batting for the first time; the moon fabric had dragonflies on it (very appropriate for our cottage area), I thought the wool batting would help the dragonflies and the pond lily stand out. Not knowing how much the wool batt would cause shrinkage once quilted, I had created a bigger piece from which I could crop the final piece. 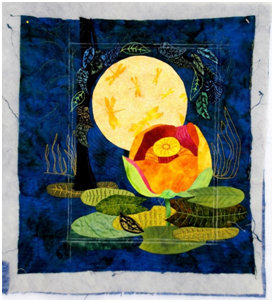 The wool batt and close quilting did not shrink the piece as much as I had anticipated. To crop the piece, I auditioned several different crops (using chalk pencil), but if I had to do it again, I would have used a 12” x 16” cutout mask to visually make the best decision. 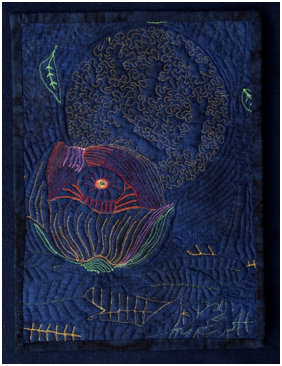 Finished quilt, with back before label applied. 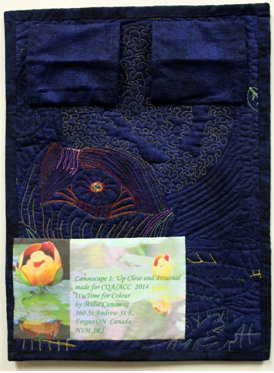 Finished quilt, with back after label applied. 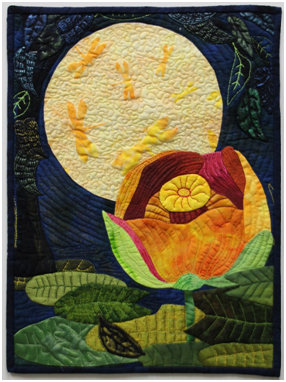